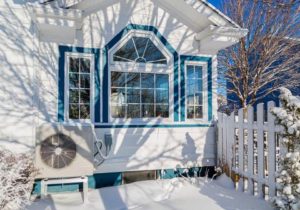 By Scott Willis and Olivia Proia

The bitter cold temperatures and the high utility bills that follow might have many Central New Yorkers wondering if there’s a more efficient, environmentally friendly way to heat their homes.

It turns out heat pumps could be the answer, and residents have a chance to learn more at a workshop Thursday.  Lindsay Speer with Heat Smart CNY says there are many possibilities for both ground and air source pumps.

“The ground is a giant solar battery, and geothermal systems draw on that energy and then pump up the heat or use it to cool your home in the summer, and do it very efficiently. The air source and the ground source systems do heating and cooling as well, so it adds benefit for people who might be on oil but don’t have air conditioning, for example.”

Ian Shapiro is founder and senior engineer at Taitem Engineering in Ithaca.  He says there’s growing interest in heat pumps.

“The big move to heat pumps is part of a national trend to get off fossil fuel.  It’s happening fast, and it’s going to only accelerate.”

He said recent design advances mean air source pumps are still able to heat a home when temperatures dip well below zero.  They are also more affordable than the ground source pumps used for geothermal systems.  For example, Shapiro said the average geothermal installation will cost around $30,000, which could be cut in half after state and federal incentives.  On the other hand, air source systems cost around $10,000 before incentives, which he said makes them very comparable to gas furnaces and central air.

“I’m predicting that within two or three years heat pumps will cost less than a fossil fuel system, and then it’ll be game over.  You won’t see any gas furnaces or gas boilers installed in new homes,” Shapiro said, referencing the Ithaca area.

It might take five years for the heat pumps to catch on statewide.  Shapiro said they’ve designed many hybrid systems where homeowners decide to keep their furnaces and central air units as a back-up.  A workshop will be held  Thursday, January 31st at 7:00 p.m. at the Bishop Harrison Center on Lancaster Avenue in Syracuse.