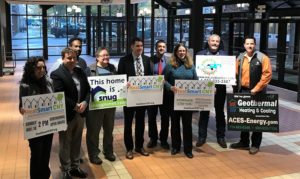 Syracuse homeowners who might have entertained the idea of switching to geothermal heating and cooling now might have the motivation they need.  Heat Smart CNY has been awarded a half million dollars by the New York State Energy and Research Development Authority, or NYSERDA, to fund the program.

“One of our major parts of this campaign is helping people learn what incentives they can leverage to make these technologies available to them. There are massive NYSERDA rebates as well as a 30% federal tax credit that can be leveraged right now.”

Speer says the program aims to modernize residential and commercial heating systems by installing air and ground source geothermal heat pumps designed for cold climates. Speer says the air source pumps were once thought not to work in cold environments, but technology advancements have made them fully functional.

“Everyone has a heat pump in their home already. It’s called a refrigerator.  So it’s that sort of same technology where it’s capturing energy and moving the energy instead of burning electricity or burning fossil fuels that allows heat pumps to work.”

Speer says they hope to start with 100 homes and grow from there.  Syracuse Common Councilor Joe Driscoll was among those who unanimously passed a resolution supporting the program last week.

Funding for the program also covers workforce training.  Residents can learn more at a series of upcoming open houses and workshops, including the kick-off November 14th at 6:00 p.m. at the South Side Innovation Center.